Courtesy Library of Congress, Papers of the NAACP

TEXT OF ROY WILKINS'S WORDS FROM THE THOUSANDS, FROM THE NATION AT THE FUNERAL OF MEDGAR EVERS, JACKSON, MISSISSIPPI, JUNE 15, 1963.

Elbert Williams's story is the account of a courageous young African American determined to claim his citizenship rights in the rural South on the eve of World War II,  an ordinary man's exhibition of extraordinary courage in the face of mortal danger.
Elbert Williams's story is that of a cash starved, undermanned, overworked NAACP staff: the brilliant young lawyer, Special Counsel Thurgood Marshall; Secretary Walter White; and Assistant Secretary Roy Wilkins attempting to cope for the first time with the murder of one of the NAACP's own civil rights activists, and prodding the United States Department of Justice to prosecute the killers.
The tale of Elbert Williams is one of a reluctant FBI going through only the motions of an investigation, and of a timid, tepid Department of Justice first ordering a prosecution, then mysteriously reversing course and closing the case.
Elbert Williams's story is one of injustice by the Department of Justice, its abandonment of African Americans and its capitulation to white supremacists; of White Terrorism triumphant; of killers never brought to justice. One wonders, might the carnage of the '50s and the '60s perhaps have been avoided, if Elbert Williams's murderers had be prosecuted in the '40s?
Roy Wilkins remembered Elbert Williams in 1963 and reminded the mourners at Medgar Evers's funeral that before the Civil Rights Movement of the '60s, NAACP pioneer fighters strove for civil rights and paid with their lives. Elbert Williams was the First To Die.
Elbert Williams's story is not over. The search continues for his unmarked grave. The quest for justice proceeds. The effort to remember and honor him, to place him in the Civil Rights pantheon with all the heros of the Movement gains momentum.

Elbert Williams's story is as American as the right to vote, and as Southern as Jim Crow. The story recounts the violent collision in June 1940, in Brownsville, Tennessee, of African American aspirations to vote with white supremacist determination to preserve their lilly white electorate by all means necessary, murder included.

"In all the murder cases I have worked on in the past 30 years, this is the most important one. It has been a sincere privilege and honor to work with Jim, Jeff, Amy and Ryan. There is no statute of limitations on murder, nor on grief!"
Dr. G. Clark Davenport, Geophysicist, GeoForensics International.. 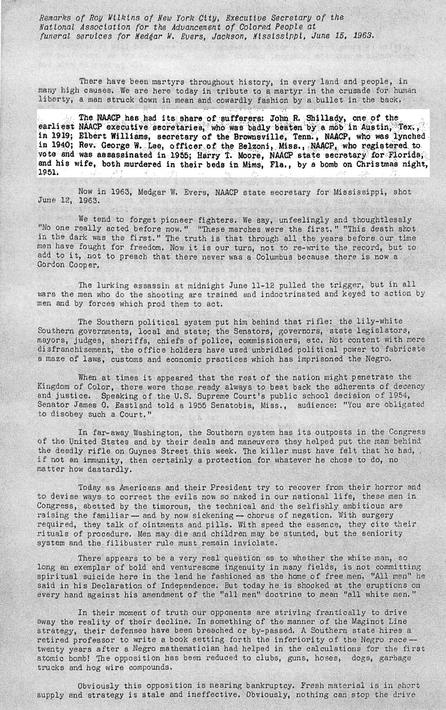 Before the murders of James Chaney, Andrew Goodman & Mickey Schwerner in 1964; Medgar Evers in 1963; or Harry T. Moore in 1951, Elbert Williams on June 20, 1940, in Brownsville, Tennessee, became the first known NAACP official murdered because of his civil rights activity.

The Hatchie, six miles south of Brownsville, from which Elbert Williams's corpse was pulled Sunday June 23, 1940.

Williams's  murder and the terror of 1940 bought the white minority of Haywood County, Tennessee, another twenty years of white supremacist rule. In 1960 when African Americans began to register to vote a white economic boycott, including eviction of African American sharecropper families, brought a young John Doar of the United States Department of Justice to Brownsville.

For Jim's blog, Who Was Elbert Williams, for The National Civil Rights Museum click:
http://civilrightsmuseum.org/who-was-elbert-williams/